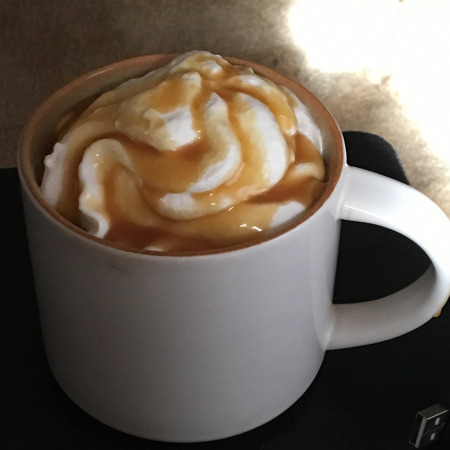 The weather outside is not delightful. One of those good days for a spiced up coffee drink. This Cinnamon/Vanilla Latte gives a little something extra to help warm you up with gentle spiced flavoring.  When the delivery guy showed up with my cinnamon Torani coffee syrup I was so excited to make this recipe. I actually ordered it in for some other coffee drinks I’m designing that use alcohol.  Today is a work day, so I decided to use both Torani Cinnamon coffee syrup and Torani Vanilla Bean coffee syrup in a recipe. You can buy a cinnamon/vanilla coffee syrup from various syrup makers already, but I like the idea of handling each flavor separately.  When it comes to lattes I prefer a stronger coffee flavor, so this time I chose to use cold brew made with fresh roasted decaf Columbian Coffee. Using decaf allows me to make my drink at the 1:1 ratio for a stronger coffee flavor without endangering my caffeine count for the day.  (And I can have more than one. smiles)

Add in a bit of milk, some naughty whipped topping, my cinnamon based spice for coffee on top, and the result was pure heaven. I tell you. It did not last very long!

Adjust ingredients to your preferences. Some like more coffee syrup in their coffee than I do. My drinks tend to use the smallest amount to get the flavor out of them and keep the calories down.